I noticed the pool before I really saw the figures as I walked around the campus of Iowa State University this morning.  Real children playing tend to capture my attention – especially  when I have no where else I have to be at the moment.  These kids caught in stone deserved a closer look.

The words on the rim of the pool are from a poem by James Whitcomb Riley.

The Hired Man’s Faith in Children
by James Whitcomb Riley

I believe all children’s good,
Ef they’re only understood,
Even bad ones, ‘pears to me,
‘S jes’ as good as they kin be!

Of course they are “as good as they kin be!”  These children are playing with a water lily and a turtle; there are a couple of frogs behind them.

Titled “The Marriage Ring” and also known as “The Ring of Life,” the original sculpture was done by Christian Petersen (Danish-American, 1885-1961) during his tenure as professor and artist-in-residence at ISU.   Because of vandalism, the sculpture was recast in reinforced concrete in the early 1990s.

“The circular basin of the pool represents a wedding ring and the valuable gems of the ring are symbolized by the three children, which Petersen considered the jewels of a marriage.” 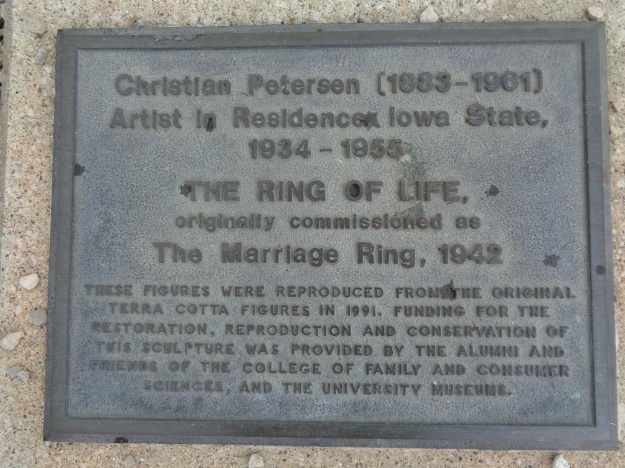 As is often the case, the pastor/teacher in me was reminded of a few words of scripture.

“Allow the children to come to me,” Jesus said. “Don’t forbid them, because the kingdom of heaven belongs to people like these children.”  Then he blessed the children.  – Matthew 19:14-15a, CEB

Whether with a child, a friend or on your own, may you have time to play today.