A made-from-scratch pumpkin cake was my first thought for this week’s photo challenge.  The picture is from my husband’s birthday and shows some of his favorite food.  Must have been soup for supper that night!  (We probably went out for fish & chips another night.)

He once made a pumpkin cake for a cake auction and I ended up in a bidding war to take it home.  It would have been ever so much cheaper to just make a second cake!  But the money was going to a good cause:  Bag of Blessings (see below for information about this fabulous program).

Just for fun, here are pictures of two cakes I made for the first cake auction for Bag of Blessings.

The doll is not edible – but her skirt is all cake! A preschooler absolutely insisted her mother get the cake for her. 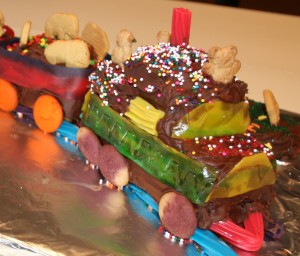 Conducted by a bear, each car of the Circus Train is a mini-loaf cake; all the decorations are edible.

In case you’re curious, here is part of an old news release about the Bag of Blessings program which began when I was the pastor at Faith UCC.

As summer drew to a close, members of Faith United Church of Christ, Muscatine, prepared for another semester of “Bag of Blessings.”  This program sends a small paper bag of food home each Friday with elementary age students who might otherwise go hungry on the weekends.  Having served 62 students at a cost of $3.00 per child per weekend last spring, the goal this year is to serve 70 children at a cost of $3.50 per student per week.

Bag of Blessings began in October 2009 … Faith United’s middle school students took up the cause.  Their initial goal was to raise $1200 for 30 children to receive food each Friday during the second half of the school year. The youth decided to hold a telemarketing campaign and told the congregation about it the first Sunday in December.  …  The following week youth called church members and made their pitch.  By the time they were done, 56 families had pledged more than $2200.  A cake auction after worship in mid-January raised an additional $1055.

Other monetary gifts were received from First Presbyterian Church, a fourth grade class at Bishop Hayes Catholic School, employees of Muscatine Physical Therapy, and employees of HON.  Grants from the Iowa Thank Offering of the Iowa Conference of the United Church of Christ and Operation Rice Bowl of the Roman Catholic Diocese of Davenport have also helped fund the program.

As the new school year began, elementary school principals were asked to identify children who were coming to school too hungry to learn. More than 55% of Muscatine students in kindergarten through fifth grade qualify for the free/reduced meal program.  A small portion of these students (30-75) rely almost totally on the school meals for their daily nutrition.  The parents of these children are asked to complete a simple application giving permission for their children to receive a “bag of blessing” every Friday afternoon of the school year.

… The students in Tammy Ales’ class at Madison School gain life skills as they pack the bags each week.  With a little help from fourth grade buddies, they read the menu for the week, do inventory, and pack the food into paper bags.  Each bag contains two breakfast items, two entrees, two fruit items, two fruit juices, a snack item and a seasonal beverage.  …

The Bag of Blessings program is now under the auspices of the Muscatine Community Food Pantry, a 501.c.3 organization.  Moving the program away from Faith UCC’s Benevolent Fund allows more funding opportunities – particularly from organizations whose policies prohibit giving money to a church. …